The Gujarat Elections 2017: Lessons and Repercussions

The week of 9th December 2017 saw the first and second round of polling in the 14th Gujarat Legislative Assembly election, with 182 members to be elected by the 43.3 million registered voters of the state. Gujarat is presently governed by the Bharatiya Janata Party, which holds the majority with 155 seats to the Indian National Congress’s 60. The state has always been a bastion for the BJP, and for good reason—they’ve governed the state for the last 22 years, 12 of them under the leadership of now Prime Minister Narendra Modi.

Considered to be one of the more traditional states of the country, Gujarat has been a BJP stronghold, thanks to its prominent Hindu nationalism—as witnessed by the world in 2002 during one of India’s worst communal riots. Commanding a majority in the Opposition of the state, the Congress party has often been seen as a ‘party for Muslims’, owing to their lack of a sufficient voter base and BJP’s strong Hindu support.

However, this election, which was predicted to be a cakewalk for Modi and BJP, has taken a surprising turn, as late polling data suggested the populace was evenly split between the two biggest parties of the country. 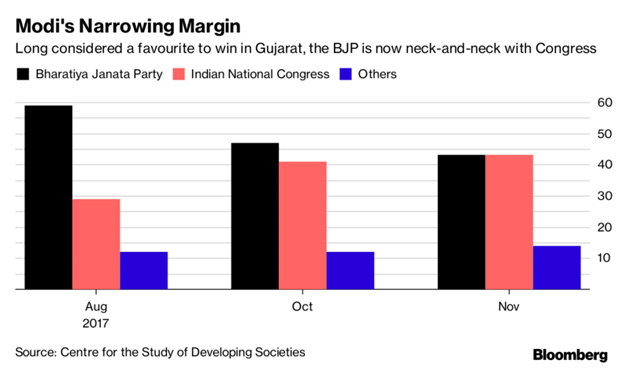 Congress, even with its haphazard organisation and recent sub-par performances,  managed to depreciate BJP’s massive lead in the home of the much hyped Gujarat model of development, which served as the foundation of Modi’s victory in 2014. Surprisingly, this Gujarat model is one of the various factors that contributed to BJP’s loss in voter base in Modi’s home state.

While the development of industries under Modi’s 12-year tenure in Gujarat is evident and irrefutable, very little policy innovation took place. He excelled in inviting large companies to set themselves up in the state. The companies grew swiftly, adding large numbers to the state’s revenue and to their owners’ bank balances. The input of wealthy industries and investments ensured that Gujarat’s major cities saw the constant development of physical infrastructure. The vast road networks, efficient power supply, and accessible public transport have set a landmark for many cities across the country. The urban voter in cities such as Ahmedabad and Surat, though affected by demonetisation and GST, won’t have any qualms about the high standard of living created and maintained by the BJP.

Where BJP missed out

However, the rise in jobs and social welfare isn’t nearly as much. As employment stagnated, many caste groups and members of the working class realised that they were being left behind by the wealthy industrialists. It isn’t just the working class that has been unhappy. The people of Gujarat have always prided themselves on being a trade-driven society. For these businessmen, demonetisation and GST were major setbacks. With unpopular GST slabs and delayed revisions, the people’s grievances went largely unanswered.

In a heavily urbanised state like Gujarat, it is essential to move away from the cities and shift focus to the rural areas. Farmers have suffered due to insufficient water supply and minimum support rates. During the Modi era, 20 kilograms of cotton would be sold at Rs 1,200 and he would call out the UPA-ruled Centre for not increasing it to Rs 1,500. Today, the prices have plunged to Rs 850-900 for 20 kilograms, while the production costs have tripled. The drought in 2016 and cyclones in 2017 have added to the woes of the farmers, who form an integral part of the state’s economy.

What shifted the tide

The Patidars, one of the major communities among the rural farmers face class-differentiation within the community. There is a growing discontent among the rural Patidar youth, many of whom are surnamed Patel, due to shrinking economic opportunities. In 2015, this discontent turned into violent agitations led by the Patidar Anamat Andolan Samiti and their 24-year old charismatic leader, Hardik Patel. The PAAS have but one demand—granting OBC status for their community to ensure societal equality. The urban Patels, mainly traders and businessmen, still seem to be backing BJP, playing it close to the chest. PAAS convener Hardik Patel with his supporters during an election rally in Surat. Photo: PTI

The Dalits have also faced various assaults by religious activists over the past two years in Gujarat, which ranks fifth in crimes against the Scheduled Caste in India. This led to the rise of political activists like Jignesh Mevani, who draw support from the Dalits and the Muslims.

These troubled communities and regional parties, and many others such as the Thakors and Kshatriyas, are now backed by the Congress and have come together under its umbrella. But unlike the 1980s, when the Kshatriya Harijan Adivasi Muslim factor made Congress invincible, a lot of other factors are in play now. The vote of almost every community is split, but the Congress is chasing it hard to bolster their strength against BJP’s campaign of Hindutva.

Owing to a shaky response, the end of the campaign saw BJP playing the communal card and polarising the electorate. The Prime Minister’s rallies over the last month have seen a stark contrast from his signature charismatic speeches during 2014. Modi and his party, now displaying a negative agenda, personally attacked the Gandhi family, questioning whether or not Rahul Gandhi was a Hindu. Modi even went so far as to say that Nehru was terrified of the BSP, a party that never held more than 14 seats during Nehru’s lifetime.

Rahul Gandhi largely stuck to a fixed script, talking about the rising unemployment, the failure of small businesses, and the crisis of the farmers. It was the regional leaders who went toe to toe against the PM’s rallies, often garnering a greater turnout. The Congress’s idea of building a base with regional leaders against the juggernaut of BJP in Gujarat showed promise. Modi is Gujarat’s favourite son, and Congress understood that no individual leader would be able to trouble him and the BJP.

Congress has staged an extremely unlikely resurgence, especially since August, by banking on regional leaders like Hardik Patel, but Gujarat remains BJP’s fortress. The vote disparity is extremely high, with the urban voter not looking past BJP, and the Congress-backed communities too widespread across Gujarat to win seats. The exit polls unsurprisingly predict a fifth BJP term in Gujarat. But the fact that the BJP may lose seats against Amit Shah’s prediction of 150 will hurt them. 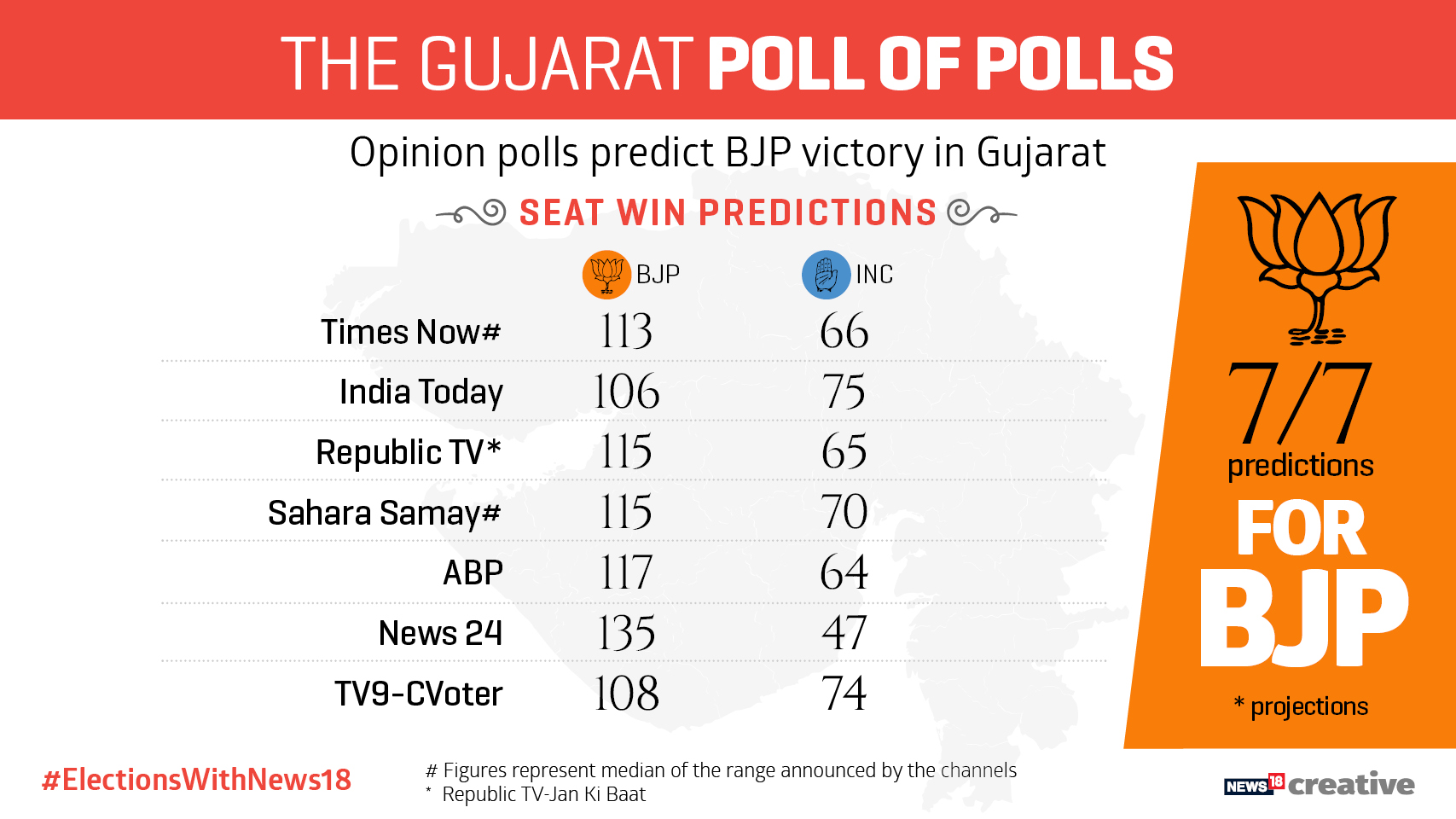 As seen on moneycontrol.com

There is rising discontentment among the people, and with leaders like Jignesh Mevani, Alpesh Thakor, and Hardik Patel being given a louder voice by the Congress, they aren’t afraid to criticise the Centre and Narendra Modi, helping reduce a major stigma overwhelming our country. The takeaway from these elections is simply that even though the Congress lacks the organizational machinery to take on the smooth working BJP, the idea of forming regional alliances against the fanaticism and following of Modi may be a way for them to get back into contention.

About the author Sudhanshu Srivastava

More of a talker than a writer.